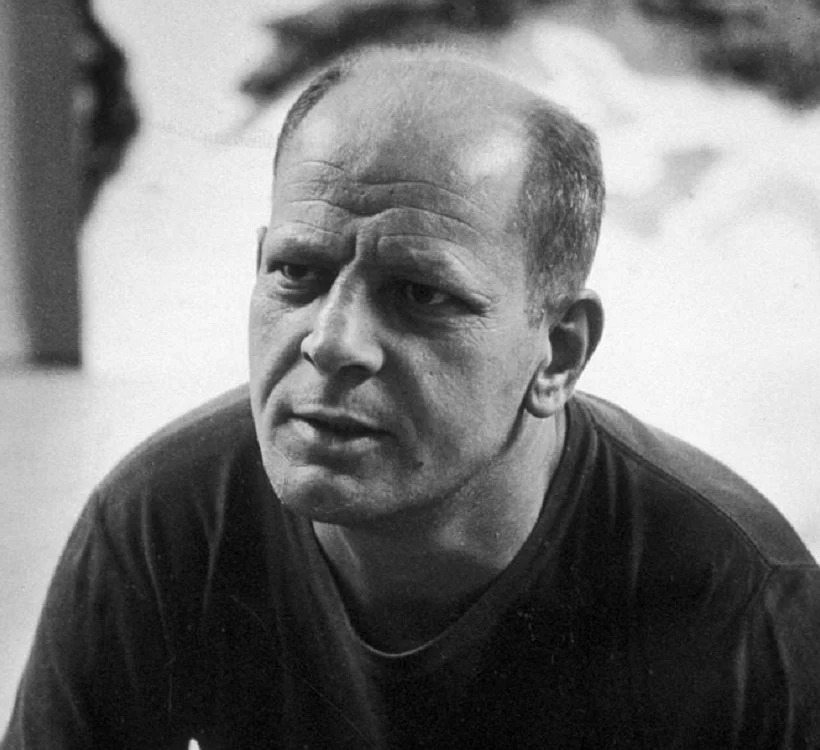 A new vanguard emerged in the early 1940s, primarily in New York, where a small group of loosely affiliated artists created a stylistically diverse body of work that introduced radical new directions in art - and shifted the art world's focus. Never a formal association, the artists known as "Abstract Expressionists" or "The New York School" did, however, share some common assumptions. Among others, artists such as Jackson Pollock (1912-1956), Willem de Kooning (1904-1997), Franz Kline (1910-1962), Lee Krasner (1908-1984), Robert Motherwell (1915-1991), William Baziotes (1912-1963), Mark Rothko (1903-1970), Barnett Newman (1905-1970), Adolph Gottlieb (1903-1974), Richard Pousette-Dart (1916-1992), and Clyfford Still (1904-1980) advanced audacious formal inventions in a search for significant content. Breaking away from accepted conventions in both technique and subject matter, the artists made monumentally scaled works that stood as reflections of their individual psyches - and in doing so, attempted to tap into universal inner sources. These artists valued spontaneity and improvisation, and they accorded the highest importance to process. Their work resists stylistic categorization, but it can be clustered around two basic inclinations: an emphasis on dynamic, energetic gesture, in contrast to a reflective, cerebral focus on more open fields of color. In either case, the imagery was primarily abstract. Even when depicting images based on visual realities, the Abstract Expressionists favored a highly abstracted mode.

Abstract Expressionism developed in the context of diverse, overlapping sources and inspirations. Many of the young artists had made their start in the 1930s. The Great Depression yielded two popular art movements, Regionalism and Social Realism, neither of which satisfied this group of artists' desire to find a content rich with meaning and redolent of social responsibility, yet free of provincialism and explicit politics. The Great Depression also spurred the development of government relief programs, including the Works Progress Administration (WPA), a jobs program for unemployed Americans in which many of the group participated, and which allowed so many artists to establish a career path.

But it was the exposure to and assimilation of European modernism that set the stage for the most advanced American art. There were several venues in New York for seeing avant-garde art from Europe. The Museum of Modern Art had opened in 1929, and there artists saw a rapidly growing collection acquired by director Alfred H. Barr, Jr. They were also exposed to groundbreaking temporary exhibitions of new work, including Cubism and Abstract Art (1936), Fantastic Art, Dada, Surrealism (1936-37), and retrospectives of Henri Matisse, Léger, and Pablo Picasso, among others. Another forum for viewing the most advanced art was Albert Gallatin's Museum of Living Art, which was housed at New York University from 1927 to 1943. There the Abstract Expressionists saw the work of Piet Mondrian, Gabo, El Lissitzky, and others. The forerunner of the Solomon R. Guggenheim Museum - the Museum of Non-Objective Painting - opened in 1939. Even prior to that date, its collection of Wassily Kandinsky had been publicly exhibited several times. The lessons of European modernism were also disseminated through teaching. The German expatriate Hans Hofmann (1880-1966) became the most influential teacher of modern art in the United States, and his impact reached both artists and critics.

The crisis of war and its aftermath are key to understanding the concerns of the Abstract Expressionists. These young artists, troubled by man's dark side and anxiously aware of human irrationality and vulnerability, wanted to express their concerns in a new art of meaning and substance. Direct contact with European artists increased as a result of World War II, which caused so many - including Salvador Dali, Max Ernst, Masson, Breton, Mondrian, and Léger - to seek refuge in the U.S. The Surrealists opened up new possibilities with their emphasis on tapping the unconscious. One Surrealist device for breaking free of the conscious mind was psychic automatism - in which automatic gesture and improvisation gain free rein.

Early on, the Abstract Expressionists, in seeking a timeless and powerful subject matter, turned to primitive myth and archaic art for inspiration. Rothko, Pollock, Motherwell, Gottlieb, Newman, and Baziotes all looked to ancient or primitive cultures for expression. Their early works feature pictographic and biomorphic elements transformed into personal code. Jungian psychology was compelling too, in its assertion of the collective unconscious. Directness of expression was paramount, best achieved through lack of premeditation. In a famous letter to the New York Times (June 1943), Gottlieb and Rothko, with the assistance of Newman, wrote: "To us, art is an adventure into an unknown world of the imagination which is fancy-free and violently opposed to common sense. There is no such thing as a good painting about nothing. We assert that the subject is critical."

Another path lay in the expressive potential of color. Rothko, Newman, and Still, for instance, created art based on simplified, large-format, color-dominated fields. The impulse was, in general, reflective and cerebral, with pictorial means simplified in order to create a kind of elemental impact. Rothko and Newman, among others, spoke of a goal to achieve the "sublime" rather than the "beautiful," harkening back to Edmund Burke in a drive for the grand, heroic vision in opposition to a calming or comforting effect. Newman described his reductivism as one means of "... freeing ourselves of the obsolete props of an outmoded and antiquated legend ... freeing ourselves from the impediments of memory, association, nostalgia, legend, and myth that have been the devices of Western European painting." For Rothko, his glowing, soft-edged rectangles of luminescent color should provoke in viewers a quasi-religious experience, even eliciting tears. As with Pollock and the others, scale contributed to the meaning. For the time, the works were vast in scale. And they were meant to be seen in relatively close environments, so that the viewer was virtually enveloped by the experience of confronting the work. Rothko said, "I paint big to be intimate." The notion is toward the personal (authentic expression of the individual) rather than the grandiose.

The first generation of Abstract Expressionism flourished between 1943 and the mid-'50s. The movement effectively shifted the art world's focus from Europe (specifically Paris) to New York in the postwar years. The paintings were seen widely in traveling exhibitions and through publications. In the wake of Abstract Expressionism, new generations of artists - both American and European - were profoundly marked by the breakthroughs made by the first generation, and went on to create their own important expressions based on, but not imitative of, those who forged the way.